3 min read This is actually a project from a few months ago I forgot to report on. Here’s how I chipped out the old vinyl floor, pulled the existing toilet, snapped in the new floor and popped in the replacement all between 8am and 8 pm.

Before I let the drywall team go to town on the basement, I wanted to exchange the upstairs toilet JUST IN CASE there would be an leakage during the process which might undo the nice clean ceiling below.  Since the basement bathroom can’t be finished until after the drywall is complete, this meant taking out the house’s only toilet.  I decided to forge head and replace both the despised green vinyl flooring and the old toilet in one fell swoop.

I was always planning to replace the upstairs toilet as it was: a) very deep in a small space, b) had a seat extender which made it oddly tall and hard to clean and c) possessed a “power flush” that could wake the dead.  My goal was to go from low to high toilet satisfaction so I chose not just to replace it with a builder basic toilet but to spring for the type I’d specify for someone else: a TOTO Aquia Dual Flush.

Note: I have liked to go still further and install a wall mount unit with the tank hidden in the wall but the house’s main vent line runs behind that stool so … it would have been way too expensive to change.

I actually took a peek at the difficulty the day before, chipping up the edge of the vinyl floor by the doorway to see how it would come out.

It wasn’t too bad actually.  The vinyl was adhered very well to a 1/8th inch layer of added sub floor dating from that install.  I’d love to know what this bathroom looked like before the 90’s hack job!  I decided to pull up that most recent ply (the cork adds height) but leave the 1/2″ plywood sub floor below that (still not the house’s base diagonal plank subfloor which is layered below THAT.

The removal process went much faster than the step of hammering all the staples flat and checking the floor for perfect smoothness and non-squeakiness.  We made a quick repair to the corner by the tub where some water damage had loosened old nails.  A few boards screwed up from below the sub floor in the basement cleaned that right up.

Snapping in the cork floor went very smoothly.  In some ways it was a challenging first project because of the many corners and prominent first edge at the tub but we got it set up and set in place by afternoon.

I started by laying out several boxes worth on the living room floor to see how they looked en masse but decided that they are so well matched (and unpredictably patterned) that I didn’t need to worry about selecting each board.

Note: some engineered floor installers recommend a vapor proof sublayer under the flooring in bathrooms.  Cork is naturally antimicrobial so I’m not worried about small amounts of moisture getting into the floor from the top but I don’t like the idea of a spill or leak getting in under the floor, then being trapped right underneath it.  I’d rather let moisture exit the system downwards through the subfloor.

I did THOROUGHLY seal the edges of the floor at the walls and toilet flange with caulk in order to prevent any surface spills from leaking downward.  Since it will be covered later I used up some of this super stylish brown.

Then we pretty much just popped the toilet into place.

Installing the Toto Aquia was easy enough that I was able to accomplish it with my dad and really minimal swearing and false starts in an hour and a half at the end of a long work day.

The instructions were no more complex than your average IKEA project and I watched this video by This Old House twice before taking it on myself.  Note: It was even easier to pop the toilet tank off a month later to paint the wall behind it. 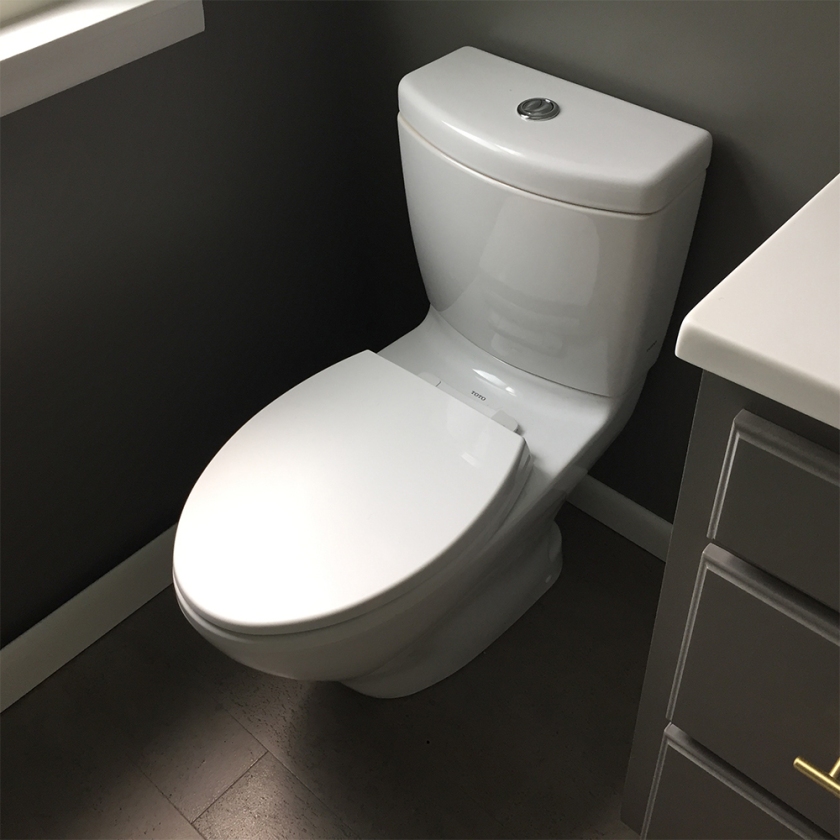