6 min read I spent the (spectacularly hot) week of my birthday pushing forward on the painting progress.  Knowing I’d have someone around to spot me, I planned to do the high-up, platform work on the south gable.

I got started on re-painting the house last fall right after we the sale closed.

The tired green color and peeling paint were about equally unappealing to me and I wanted them gone.  Plus I wanted to get some plantings in to replace the hedge I tore out and I knew that new plants wouldn’t appreciate drop cloths, ladders and the general tramping around that painting a house takes.

I knew it was going to be a tough job, made a little tougher by the lead paint underneath the green – which meant I’d need to follow proper safety procedures when scraping and sanding and the year was getting cold fast so I committed to just doing the front face of the house – the east – for the fall and coming back to the rest this year.

Here’s where I stopped: grey on the street side, peeling green paint left on the north gable.

Read more: GOING GREY, OR, IT’S NOT EASY TO PAINT OUTSIDE IN THE SWING SEASONS

I’d been trucking away on the interior for a while now when I realized that the summer was going to be heating up soon.  If I wanted to get the exterior finished without dying of heat stroke … I’d better get on it.  I took an easy warm up lap – the west face of the garage is all accessible by step ladder and I didn’t even need to crush the any garden under foot.

The boards were in pretty bad shape but a vigorous hit with the orbital sander was able to remove ALL the loose paint and get them relatively smooth.  I moved straight ahead to the priming that same day to ensure that moisture under the exposed edges wouldn’t cause them to peel all over again.  Instead of moving on to paint – the primer can stand on its own for a month or so – I I turned the corner and started working my way up from the bottom of the garage gable to the top.

Unlike my attack on the front face – getting help from my mom and doing a whole phase – scraping, sanding, washing, priming and painting – in its entirety before going on – I took on this project by myself and just slotted it in for a few hours at a time over several days.  I’d suit up in Tyvek, scrape and sand one area, clean it with the spray bottle, prime and then quit for the day.

Note: some of these photos show the plastic folded back to the house to avoid overnight rain.  When I was working it always covered the whole planting bed – 10 feet out from the house!

The adventure really kicked in when we set up the ladder jacks and platform to reach the upper gable portion of the house.  I DO NOT LOVE heights but managed to get the job done with two feet on the platform and one hand on the house at all times with no mishaps. 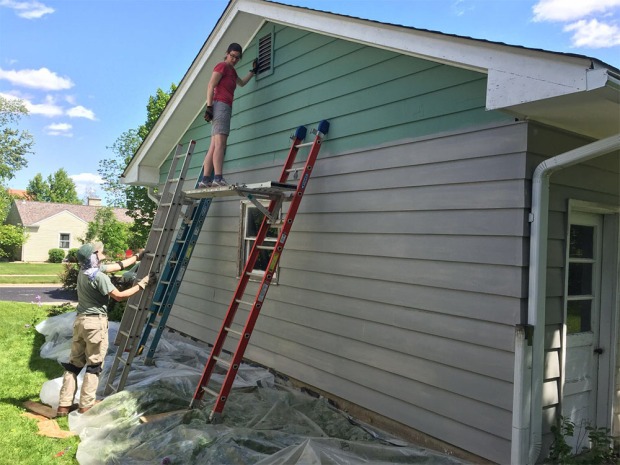 I decided to go ahead and put the first (of two coats) layer of dark grey paint on that highest portion, to minimize the number of times we’d need to set up the platform.  The primer is dry and ready to re-coat in an hour but the paint needs to cure overnight before its second coat so I’ll have to come back later to get that part.

I also applied the white primer and paint to the soffits.  Fortunately they will only need one coat – they were in much better shape.  The change from beat up, dirty,  60 year old white paint and fresh new white doesn’t really pick up well in photos but it is satisfyingly dramatic in person!

We had to set up the ladder jack platform in three places – higher in the middle and lower on two sides.  I came back with a single ladder and got the spots where the platform ladders had rested at the very end.  I’m relieved to be mostly done with that part but in fact I’m only half way done – I have the south face gable still to go.

Here’s the state of the garage wall now – not quite finished.  But I want to keep pushing ahead with the ladder jack work – the high stuff – on the south side, while I have some momentum.  Also, I don’t feel safe working on the ladder platform so I have to concentrate that work to times when I can entice my parents to come into town to help/hang out and spot me.  The painting of dark grey on the lower portion can happen later when I am working on my own.

To shake things up from the north side where I started scraping, priming, and painting at the bottom and worked my way up, I started from the top this time.  Setting up the ladders seems like its going to be easy and then takes an hour or more, so I tried to plan the bursts of effort both  around our natural breaks for food and water.

Scraping, sanding and cleaning can be followed immediately by priming.  Dad contributed very thorough sealing of all the nail holes and other damaged areas with caulk – which needs to dry for 2-4 hours before being primed or painted.  If we prime over the caulk, THAT has to wait an hour before being painted.  Then the second coat has to wait over night.  I was juggling not only the grey primer and paint but also prepping, priming and painting the soffits white.

All those logistics meant we only got a tiny triangle finished in the first burst but from there we made rapid progress.  In the end we pushed on through to final coat paint over the whole upper area in two full work days with one final early morning ladder placement to put the second coat on the upper east side.

Rain shut me down for another few days but then I took the opportunity to scrape and prime the lower part of the wall on my own.

Then on Friday I pushed myself out into the nasty sunny humidity and powered through the first coat of (almost) all the south side – I just didn’t have it in me to keep going on the last four boards on my knees – then caved and moved around to the shady north and finished off the whole first coat.  It all needs one more coat now but it will keep until the rainy weather lets up.

It’s not ACTUALLY done, but it looks pretty close to done.

Read More:  THE TOOLS YOU NEED TO SCRAPE AND SAND EXTERIOR WOOD SIDING