5 min read Here’s an interesting example of the residential ARCHITECTURE being constructed at the same time as the ranch house was filling the country. Farnswoth house has been called the “reducio ad absurdum of the notion of a dwelling.”

The Farnsworth house is clearly NOT a ranch but it was built during the height of the ranch era -constructed (just a year before my own home) in 1952.  It is an peak example of the purely architectural residential design then and a strong contrast to the standard single family homes being built at that time.

How the Farnsworth House Came to Be

Farnsworth House in Plano, IL is, according to Kenneth Frampton, the “reducio ad absurdum of the notion of a dwelling.”1  In other words, it is the idea of a house reduced to its most simplified form, well beyond the point of good sense.

It was designed by Ludwig Mies van der Rohe in 1947 for Dr. Edith Farnsworth, a successful single doctor in her mid forties who wanted a small, weekend house in the country.  Mies was a German ex-patriot full of grand academic concepts about the future of design but with very little experience or built work.  They met in 1945 at a dinner party and, according to Farnsworth’s journals, began planning the project that very night.2

The two became friends over a two year design process which grew from multiple site visits to extracurricular socializing and a strong connection between Farnsworth and then entire design office.

Her role in the building gradually metamorphosed from that of client to patron.  As the design process continued, the building likewise shifted from the original notion of comfortable but architecturally provocative retreat for a single woman to “an exercise in architectural minimalism”3 which had little to do with any consideration of Dr. Farnsworth’s needs or plans.

In the end, the Mies and Farnsworth had a huge falling out which extended into the courts – each sued the other over the the final cost of the building – and the press.

Their public battle did neither any good; Mies was vilified as out of touch, and a poor designer, while Dr. Farnsworth was ridiculed as an elitist fool who had paid nearly twice the cost of a suburban home for a “glass cage on stilts.”4

To me, the most hard-hitting of all Farnsworth’s complaints about the finished house is the pervasive lack of privacy.

Her bedroom was enclosed on three sides with sheet glass (which must have felt much more like a space for the observed rather than the observer, especially once the controversy began drawing crowds of trespassing gawkers).  The fourth “wall” was a 5′ partition screening it from the living area.  Farnsworth had wanted it to be higher – as she was 6′ tall – but Mies insisted on a lower datum line in deference to the proportion of the building!5

Dr. Farnsworth lived in the house for 20 years.  She refused to use the furniture Mies had intended for it, filling it instead with her own objects and family heirlooms.  Eventually, she sold it (to a Mies enthusiast) and moved to Europe, presumably to a house which did not purposefully feature her as the lone figure of interest in a solitary landscape.

The Farnsworth House as “Architecture”

My experience of the building is very different from Edith Farnsworth’s.

Today it is owned and operated as a tourist destination by the National Trust for Historic Preservation. It is no longer a home, and stands purely as an architectural triumph with no pesky, complaining resident.  It can be rented for weddings, “cocktail parties” or corporate meetings.

It can also be visited by busloads of architecture students like on a pilgrimage, which is how I first saw it in person.  Even knowing the backstory, I was entranced.

My well-thumbed architectural history text tells me that The Farnsworth House (how ironic that name feels once you know the history) reduces the basic elements of architecture into “a mechanistic hovering plinth, support and architrave” which “recalled the abstract painting of the 1920s.”6

The design is rife with impractical and complicated manifestations of purity.  For example, the terraces which surround it are perfectly and precisely level, which means they need a unique drainage system of “inverted pyramidal drain pans” to allow water to run off between the travertine pavers (which are arranged in an unbroken 2′ grid).  Each window bay comprises eight of these 2′ modules and all the services of the building – kitchen, two bathrooms and all storage – is contained in the central block which is uniformly paneled in high quality plywood.7

Mies, himself, said of the house:

“Nature should also have a life of its own.  We should avoid disturbing it with the excessive color of our houses, and our interior furnishings.  Indeed, we should strive to bring Nature, houses and people together into a higher unity.  When one looks at Nature through the glass walls of the Farnsworth House, it takes on a deeper significance than when one stands outside.  More of Nature is thus expressed – it becomes part of a greater whole.”8

Columbia University has a website devoted to the house with some rather interesting structural and heat load analyses.  Their discussion of its history and architectural merit is pretty formal and sanitized although they do acknowledge that, “its design neglects some traditional domestic conventions and comforts.”9

Interestingly, as a further demonstration of the Mies’s commitment to isolate and separate the house from the world around it, their analysis points out that the horizontal planes are punctured in only two places – drain and sewage pipes going down a tidy chase way and a single vertical access for both bathroom vents and the fireplace flue.

Nothing else interrupts the streamlined floating plinth.

I recently listened to an excellent interview (link to Soundcloud here) with Dale Gyure, author of a new book on another midcentury architect, Minoru Yamasaki.  He said that Yamasaki was a self-described “humanist” architect, who prided himself on incorporating serenity, surprise and delight into his designs.  “Mies van der Rohe was his hero.  But he was a little bit critical of Mies.  He felt like Mies got everything right in his designs except that he tended to forget about people.”10

That sounds about right to me.

It is hard for me to admit having problems with this building.  It is such a beautiful object – a perfect jewel box of a building – so compact and sleek.  The fraught social history can’t prevent it from from being an architectural icon.  I loved visiting the place and regard it as a fascinating idealization of a house.

On the other hand, it seems so completely non-functional.  There is no privacy from the outside world or from any other occupant.  It has only two operable windows – making a nearly hermetically sealed environment which can rarely have been a thermal delight.  The stark, industrial materials that make it up are only given beauty by a) the contrast of their setting in nature and b) the exquisite (and costly) design with which they are arranged; it’s not as if this type of building could be streamlined into a prototype for larger scale production without being quite dreadful.

I have very mixed feelings about buildings which purport to be functional dwellings but are actually extremely large pieces of sculpture or intellectual exercises made manifest.

What do you think about Farnsworth House’s place in history? Are you Pro or Con?

Note:  Update of a post I wrote for Dwelling Places in 2011.  Photos my own.  Sources below: 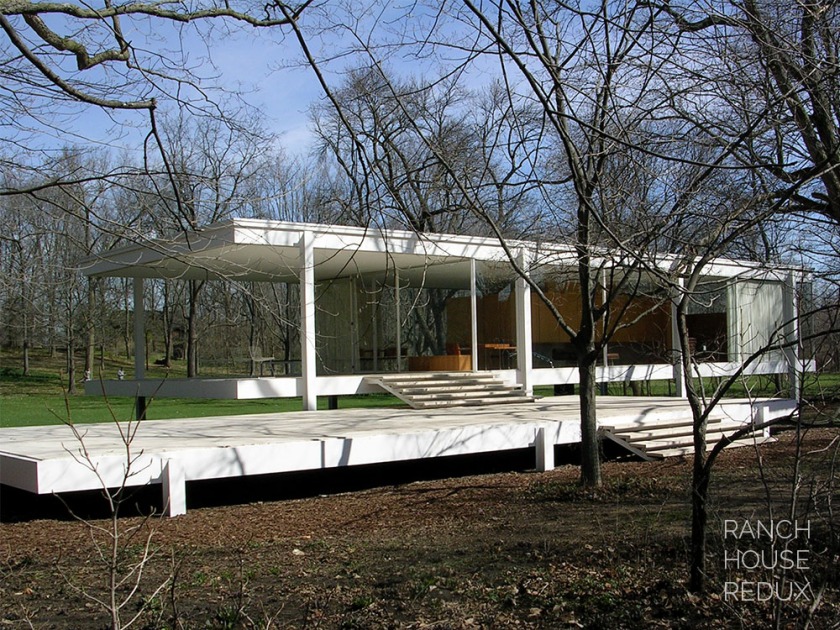